from a country town to an international small city

The relaxing city tour through the old town and up on Annaberg hill takes you to Grafenwoehr’s sights and most beautiful places and presents centuries of the history of the city.

1 a Fountain at the town hall

Pictorial for the city which has raised like an island out of the water. Artist: Helmut Langhammer, Pressath.

Burnt down 1880, only access to old town in addition to the Lower Gate.

Donated by the class of 1932/33. Real brewing copper from the former Loewen brewery.

Former brewery at the bottom of Annaberg hill. Memorial stone commemorating the demolition in 1994 at the rise near stations of the cross.

Built 1753-1770, baroque, interesting ceiling fresco, only open on special occasions. Stations of the Cross and pieta with corpus of Christ.

Donated 1894 by beneficiary Röger. Statues of Mary and Bernadette of Lourdes.

Invisible remnants of old castle walls of the Leuchtenberg dynasty below ground. Decay obviously just a few years after the foundation of the town.

Built 1608, blown up in 1945 by the advancing American troops.
Commemorative plaque at the city mill as well as marks in the pavement.

Built in the late 14th century, late gothic, later baroquized, baptistery from 1425 near the entrance, side altar with St. Sebastian (local vow holiday on Jan. 20)

Built 1496, formerly located at the bottom of Annaberg hill across from the Loewen brewery, moved to the market square in 1982; depiction of the passion of the Christ in four scenes. Locally known as „Plague Column” because it is believed to have been built because of a plague.

Remnants of the former town fortification from the 14th century; formerly inner and outer city wall ring with round bastions; additional remnants of the city wall can be seen near the communal brewery and in the museum.

BOOKABLE: During a tour you learn more about the individual stations and historic
Grafenwoehr.
Duration: 1.5 hours
Group size: Upon to 30 persons
Price: 45 Euro 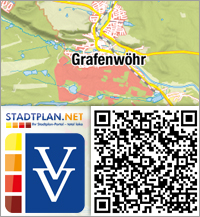